United by our Core Values of Brotherhood, Leadership, Adaptability, Self-Efficacy, and Excellence (BLASE), our school will provide young men of all backgrounds and experiences with a multidisciplinary academic, character, and social education in a nurturing environment. At Stradford Prep, we inspire and engage young men by creating the opportunity that empowers and holds them accountable to independence and greatness.

Our school will provide the highest quality educational experience from boyhood to young adulthood to fuel the academic, cultural and character growth of each student, helping each realize his highest potential.

We believe that every young man in our country -no matter his socio-economic status, race, or geographic location – has the ability to learn, grow, and develop into a successful, self-directed young adult. At Stradford Prep, our mission, vision, values, and curriculum are aligned to this belief. We believe it is our social responsibility to close the achievement gap, opportunity gap, and engagement gap, and provide opportunity for our young men. Our school environment will reimagine, redesign and recreate the student experience for all male students.

Our core values of Brotherhood, Leadership, Adaptability, Self-Efficacy, and Excellence (BLASE) are central to our approach:

At Stradford Prep, brotherhood means creating “Brotherly Ties” by working together to accomplish goals and create learning communities. Brottherhood is built upon mutual respect for classmates and love for the Stradford Prep community. As brothers, our scholars will share common interests or qualities and act with respect, warmth, and equality toward one another, regardless of differences of race, nationality, age and/or economic status. Brotherhood at Stradford Prep is an unbreakable unity between young men to reach their full potential

At Stradford Prep, leadership is a privilege. Leadership at Stradford Prep carries with it the responsibility to inspire others, and to direct them to attain the vision and goals of Stradford Prep. Our young men will guide and facilitate others through community service projects, mentorship program discussions and a sense of personal and professional pride to make a positive difference in their own lives and to contribute to a larger good of our school community.

Stradford Men are flexible and have the ability to adapt to the changing society in which we live. Stradford Men will not fold under pressure when something changes or a problem occurs. We will teach our young men to develop solutions when there is a problem. Our boys will learn to adjust, adapt and evolve as they navigate their way through high school and beyond.

At Stradford Prep, our young men will assume personal responsibility for their learning and development. Scholars understand that effort and persistence are vital to the outcomes of any task or assignment. Our young men will believe in their ability to succeed in any situation.

The young men of Stradford Prep will pursue excellence in all that they do. Good is never good enough for a Stradford man. At Stradford, our young men will be innovative and improve each day, model positive actions as they achieve high expectations, and work as a team to guide each other towards common goals.

Inspiration Behind the Name

From a very young stage in her professional career, Dominique Nute, our school’s founder, has always been deeply motivated to build an environment where young men could work on their sense of self while building a brotherhood among one another. After successfully completing a Master’s Degree in School Leadership from Columbia University’s Principal Academy, Dominique took her years of experience with Teach For America, and the NYC DOE and applied to be a fellow in the School Empowerment Network in order to open a high-performing all boys charter school. It has always been her goal to provide young men with a world class middle school education that leads them to enroll in and graduate from the most prestigious high schools in New York City and then college. She would embark on the journey of making that possible by opening Stradford Preparatory Charter School for Boys.

Stradford Preparatory Charter School for Boys will open its doors in fall of 2021. Our school is modeled after J.B. Stradford, a man who exemplified self-sufficiency, adaptability, and leadership to uplift the community of Greenwood in Tulsa, Oklahoma. Despite being born into slavery in 1861, J.B. Stradford learned to read and write at an early age. Through his father’s persistence, defiance and strength, his family gained its freedom, enabling J.B. to attain an undergraduate degree at Oberlin College in Ohio, followed by a law degree from Indiana University.

J.B. Stradford was an outspoken advocate for the African American community, promoting equal treatment and unity for his people. He believed in the promise of America to offer equal opportunities to all people willing to work hard. Stradford became a successful entrepreneur and moved to the Greenwood community in Tulsa Oklahoma in 1899. Stradford bought and sold land to African American families and businesses, creating a thriving economy within the town of Greenwood, which would eventually be known as the “Black Wall Street.

It is the same relentless pursuit of excellence that is both the inspiration and the mission of Stradford Preparatory Charter School for Boys. Our recent 2020 partnership with Brick Education Network has enhanced that mission and strengthened our ability to help our young men begin to BLASE (Brotherhood, Leadership, Adaptability, Self – Efficacy, & Excellence) their own paths to success. Stradford Prep and Brick Education Network will see to it that J.B. Stradford’s resilience and success will continue to be a source of motivation and a shining example for all young men. 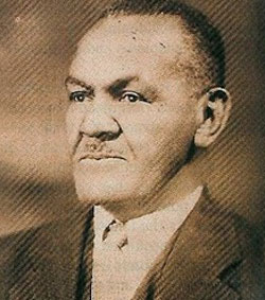 “Success is to be measured not so much by the position that one has reached in life as by the obstacles which he has overcome while trying to succeed.”